“Nunca Más accompanies people in their ongoing societal struggles, and deals with the contemporary trauma that these people experience without disregarding or neglecting the structural root causes for these traumas, by working with elements and approaches coming from this tradition, like for instance the kind of Testimonial Therapy that Nunca Más uses”

The psychosocial approach of Nunca Más comes primarily from the thinking of the psychologist, philosopher and Jesuit priest, Ignacio Martín Baró; who was himself mainly influenced by cognitive psychology, social constructionism and political economy approaches in order to understand the social order and the political role and involvement of social psychology. His legacy remains still very visible, particularly related to areas affected by violent social conflicts such as for instance, Latin America, South Africa, North Ireland, USA, etc.

The two major components of this approach are:

This is per se a non-Western conventional psychological approach that invites and prompts to be reflexive, to examine who we are and to critically analyze our power, position and privileges relative to those others with whom we work with directly or indirectly. From this perspective we are asked to study and understand the social settlement of our work within historical systems of power and status quo, leading to reflect and to be conscious of our neutrality or non-neutrality as mental health professionals, and even more important to challenge this by the hunting of new and different models of work. Neutrality as mental health professionals is not an option under this approach. Psychologists not taking a stand on social issues are serving the interests of the ruling classes, particularly, when one is working in a conflict, war, violence zone with people whose human rights have been and are violated, as well as, with people whose stories need to be kept in a Historical Memory that can help to guarantee that those events will not be repeated ever again and can help in the look for justice and reparation.

From this perspective, individuals and society are mutually and dialectically constitutive of human actions, shaped by social actors and forces as well as their particular history. Therefore, we are challenged to de-ideologize and deconstruct, which is the path towards a liberation psychology.

This means that the main focus should be the needs of the population, the liberation of the individual person and the people (el pueblo).

In this regard, the focus must be to construct “from below” the truth of the oppressed ones, of the base, of the wider population, and from there we must develop new knowledge that enriches our theories and praxis; a psychology that contributes to the liberation of people. Everyday lives are built into a set of assumptions or ideological beliefs that we need to be aware of in order to deconstruct and reconstruct. The tasks to achieve this are: recovering historical memory, de-ideologizing everyday experience, and utilizing people’s virtues (Baró 1986/Gondra, 2013).

On the other hand, under this approach, mental health per se is a result of the relationships between persons and groups more than an individual state of being. It emphasizes that mental health or illness is not the result of an individual’s internal functioning, but instead the manifestation, in a group or in a person, of historical relationships. Therefore, treatments and interventions must be addressed to the relationships between social groups, which constitute the “normal abnormality”.  The interventions shall not pathologize people but instead they focus people’s resources, capacity and resilience. Baró formulated the concept of “psycho-social trauma” from all this, thinking of it as something structural, collective, residing in the psycho-social relationships, the ways in which people interact with each other and the breakage in the socio-political arena, rooted in colonization.

In brief, Nunca Más accompanies people in their ongoing societal struggles (the solidarity element), and deals with the contemporary trauma that these people experience without disregarding or neglecting the structural root causes for these traumas, by working with elements and approaches coming from this tradition, like for instance the kind of Testimonial Therapy that Nunca Más uses. 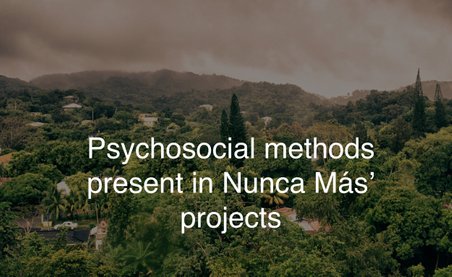 For more information on Psycosocial Processes: 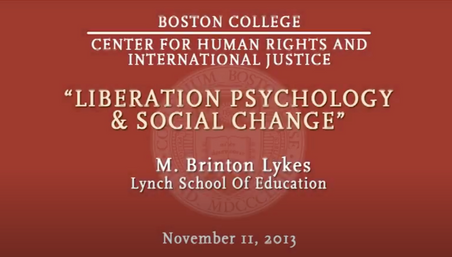